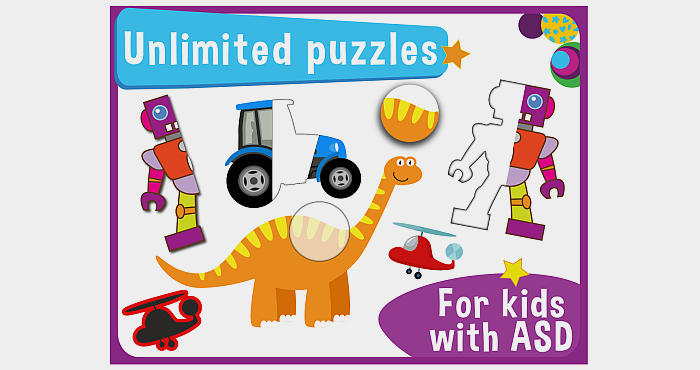 This app is not only used by more than 25,000 children with autism spectrum disorders it comes highly recommended by hundreds of doctors and pediatricians as well. MITA stands for Mental Imagery Therapy for Autism and is an early intervention application for autistic children. The app makes use of bright puzzles that are also interactive and designed specifically to help these children integrate differing features mentally of any particular object. This has proven to drastically improve general learning.

MITA is based on one of the best therapies available now for children on the autism spectrum, known as Pivotal Response Treatment, or PRT. Up to three critical areas of development are targeted by these puzzles:

The ability of a child to both notice and respond to multiple visual cues is one of the most critical for appropriate development. This is a typically impaired ability in those with autism and can lead to what has been known as stimulus overselectivity. You might also have heard it called tunnel vision. Improving this capacity has shown to greatly reduce stimulus overselectivity. This leads to an overall improvement in learning in general.

This app comes equipped with nine different games that help to develop mental integration in the child, as well as training of their language function. There is a systematic approach to the visual exercises that allow a child to notice several different features of a particular object. Beginning with simple exercises, they get more and more difficult as progress is made. The characteristics increase in number as the child learns to comprehend each aspect.

Verbal exercises help to train mental integration for your child. They use a verbal approach to help with language learning, beginning with a simple vocabulary. As levels increase, higher language forms are used to include adjectives, prepositions and other forms of general syntax.

As more and more of the exercises are progressed through by the child, they become more able to attend to numbers of features together. Tunnel vision, because of this, is greatly reduced, while their ability for language increases. They also acquire the ability to build mental images associated with the features that are critical for understanding verb tenses, spatial prepositions and syntax.

This program is specifically designed for early childhood education. It is also best used as a daily program over the long term for the best results. Not only is it engaging as well as educational, but it is also adaptive in nature and responds to the particular abilities of the individual child.